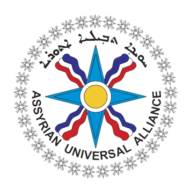 Sub Commission on Prevention of

Discrimination and Protection Of Minorities Working Group on Indigenous Populations

Review of recent developments pertaining to the promotion and protection of human rights and fundamental freedoms of indigenous people:

May I firstly congratulate you on your recent appointment as chairman of the Working Group on Indigenous Populations.

The Assyrians, Mr. Chairman are the descendants of the ancient Assyrian civilization, often referred to as the land of Mesopotamia. Today this is known as Iraq. Iraq, was formed in 1932 and in that process was required to sign the international Declaration of the Kingdom of Iraq. It was agreed that the said Declaration was to prevail over all current or future laws and regulations.

The Iraqi Declaration provides to all Iraqi inhabitants, guaranteed protection of life and liberty (Article 2.1) and the right to freely exercise their religion (Article 2.2). It also entitles Assyrians, to enjoy interalia, the right to maintain, manage and control schools and other educational establishments, with the right to use their own language (Article 5). More significantly the Declaration provides that in towns and districts in which live nationals whose mother tongue is not the official language, the Iraqi government would provide for adequate facilities for ensuring that in primary schools instruction would be given to such children through the medium of their own language (Article 8.1).  It also provides that such nationals would be assured an equitable share in the enjoyment and application of public funds under the state, municipal or other budgets for educational, religious or charitable purposes (Article 8.2).

Whilst the Declaration, does not specifically recognize indigenous rights of Assyrians and Kurds of Iraq, it does make positive provisions and order certain guarantees. If adhered to by Iraq, in conjunction with all its other international obligations as a member state, it would perhaps not have been necessary for us to be present at this meeting.

Instead, Mr. Chairman, Assyrians and Kurds have, due to the fact that they are indigenous, suffered massacres, persecutions, forced internal displacements and more recently forced migration out of the homeland. Assyrians have no right to equal citizenship, nor any political or indeed any form of representation, and according to the UN special Rapporteur on Human Rights, at more risk of summary, arbitrary and extra judicial executions. Iraq’s national census does not provide for any recognition of Assyrian existence. They are deprived of social security benefits and either precluded from tertiary education or expelled at will. The Assyrian people’s health has deteriorated and their life expectancy substantially reduced in comparison with other Iraqi nationals.

Attacks on ancient Assyrian ancestral lands and villages have also been ongoing in Iraq for decades. According to the Assyrian Human rights report, in the period 1976 to 1977, more than 200 Assyrian villages in northern Iraq were razed by the Iraqi government. All the inhabitants were forced to resettle in urban areas, in order to prevent the establishment of a concentrated Assyrian presence anywhere in the country. Since then another 252 villages have been confiscated. Under the current system Assyrians have no recourse to any form of legal justice. The occasional resistance to such land confiscation has been met with total retribution and often death, including death of entire families.

Assyrians have thus been robbed of their livelihood and removed from their sacred and ancient lands. These are the sites that bear testament to the ancient Assyrian history and heritage dating back to thousands of years, sites under which are still buried ancient treasures artifacts tablets statues reliefs temples and even ancient cities.

These lands are used by the government for housing and other developments including oil explorations, none of which are used for the benefit of Assyrians, nor by payment of any compensation. The removal of Assyrians from their land has also enabled plunderers and smugglers of Assyrian artifacts to flourish, particularly following the gulf war and the subsequent UN sanctions.

This has the consequence of destroying priceless amounts of historical artefacts. It also means the irreparable damage to proper future scholarly and scientific exploration and thus the suppression and / or manipulation of our history.

Assyrians, Mr. Chairman, do not have the political opportunity to enter into any dialogue directly and internally. So that the grave concerns I have put before you can be addressed, and so that some solution may be found for the complex Assyrian situation I respectfully make the following recommendations :

·  That the Iraqi government be called upon to comply with its international obligations including the very provisions of the 1932 Declaration that became the reason for its formation;

· That Iraq be required to officially recognize the identity of the Assyrian people and their status as the indigenous people of Iraq;

·  That you Mr. Chairman pay a field visit to Iraq in an attempt to encourage dialogue between and among the Assyrian indigenous people and Iraq;

·  That the working group work with the country specific Special Rapporteur so as to incorporate therein, the indigenous issues as priority;

·  That Iraq be required to apply a proper and significant proportion of  funds from export of oil, for the implementation of programs of education health and resettlement of Assyrians in their traditional villages;

· That the international community do all that is necessary to ensure that the rights of indigenous people in the situation of Assyrians be recognized as ongoing rights, and not rights which can easily be stolen by violation of their most fundamental human rights.